Peak Flow
The peak flow forecast represents the maximum mean daily flow (the highest average flow for an entire day during the run off season) at a point during the April through July period, unless otherwise noted. It does not represent the instantaneous peak (the maximum flow at a single moment). In the case of smooth snowmelt regimes (hydrographs), it may be acceptable to approximate one with the other. The Average Peak and Normal Time of Peak (defined as the average date of peak plus/minus one standard deviation which should include approximately 70% of the peaks) for a given gage are all derived from 1981 through 2010 data whereas the Historic Peak is derived from the period of record, including the most recent years, after reservoir regulation began.

A hydrograph including the current peak flow forecast in relationship to historical peaks and the April through July stream flow can be obtained by clicking on an individual id in the "NWS ID" column. A short term stream flow forecast is available by selecting "More Plot Options".

Regulated vs. Natural Flows
An even more fundamental limitation is that peak forecasts describe regulated (actual or observed) in-stream flow well into the future, something difficult to do considering the quantity and changing nature of diversions in the Colorado River and Great Basin watersheds. (Note: supply forecasts deal with hypothetical "natural" flow - that which would have resulted in the absence of regulation). The Colorado Basin River Forecast Center routinely forecasts regulated streamflow, but only for several days into the future. Further into the future the ability to forecast reservoir regulation becomes more limited.

Different Uses and Users
Peak flow forecasts are used for different purposes than water supply volume forecasts. Users of these forecasts would include river recreationists, flood control agencies, emergency service directors, wildlife managers and anyone interested in the combined effect of watershed yield and human regulation on the actual (observed) in-stream maximum mean daily flows at a site.

Flood Flows
The National Weather Service defines flood flow as the flow at which damage to structures begins to occur. Over-bank flow may occur but still be below the defined flood flow. Flood flows contained in this document change from year to year due to such channel processes as deposition and scouring. Therefore, the flood flows that follow should only be applied to the current runoff season. It should also be noted that they are instantaneous flows and not maximum mean daily flows. It should be noted that flood flows are not defined for all points. This does not mean flooding can not occur. 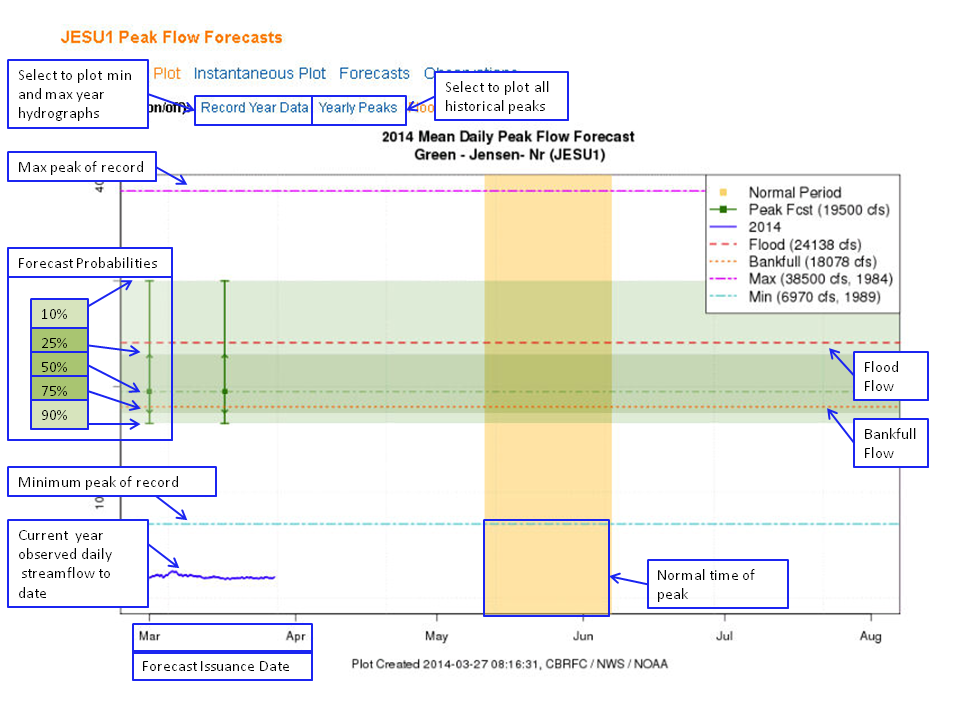